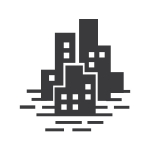 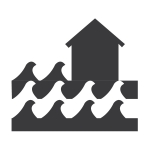 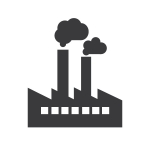 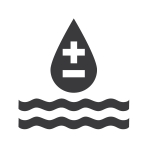 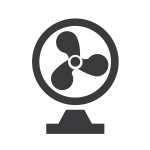 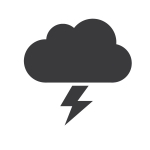 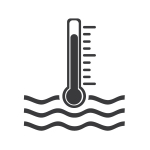 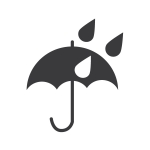 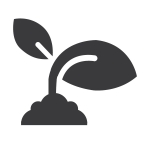 The Earth’s climate and conditions are changing. For us here in southeast Florida, this means higher temperatures, shifting rainfall patterns and more frequent extreme rain events, as well as drought. Our seas are rising, causing increased flooding, saltwater intrusion and various other health impacts. Natural systems and coral reefs are being impacted with these change in conditions.

The Southeast Florida Regional Climate Change Compact has partnered with the Florida Climate Institute and the South Florida Water Management District, as well as other agencies, to begin to monitor and measure these changes and impacts.

Beginning in 2016, the following indicators will be monitored for changes.

In 2015, the Sea Level Rise Work Group of the Southeast Florida Regional Climate Change Compact updated the unified regional projection based on global projections, guidance documents and scientific literature released since the original regional projection in 2011. The objective of the unified sea level rise projection is for use by the Climate Compact Counties and partners for planning purposes to aid in understanding of potential vulnerabilities and to provide a basis for developing risk informed adaptation strategies for the region. Click here to read the full unified sea level rise projection report. 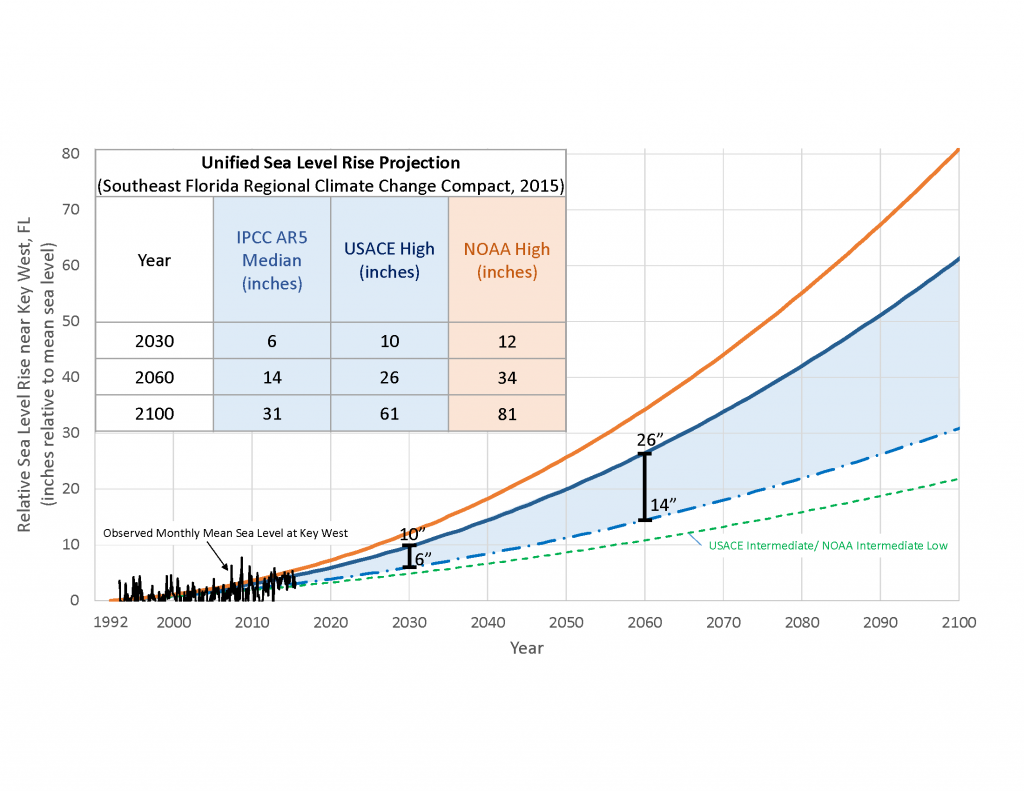 Nuisance Flooding – The Compact, in coordination with local municipalities, will monitor instances of nuisance flooding at select areas throughout the region.

Nuisance flooding in South Florida refers to the above normal high tide events when water levels flow over the tops of sea walls and onto streets or force water into stormwater outfalls. Saltwater from the tides leads to corrosion of cars and metal-reinforced infrastructure and impacts local businesses when roads are closed. In 2015, the greatest number of these nuisance floods occurred in correlation with the above average and infrequent “super moon” events. Even prior to last year’s circumstances, nuisance flooding events have increased in recent years and are often enhanced by coinciding storms, wind, or surge conditions.

GHG – The Compact will monitor GHG emission sources, and is in the process of updating its baseline measure of 2005 – 2009 (which can be read here).

Saltwater intrusion is caused by either increasing sea levels or a reduction in inland freshwater levels. Saltwater intrusion can lead to contamination of coastal drinking water supplies. Over time, saltwater has continued to intrude inland in South Florida, causing numerous well fields to be compromised. As the sea level rises, further intrusion will occur. 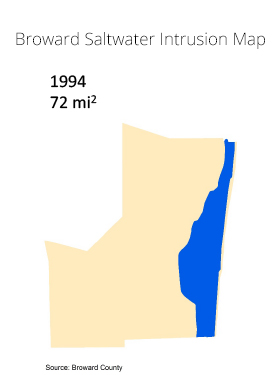 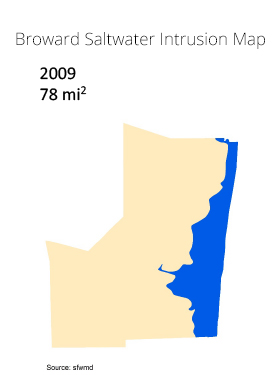 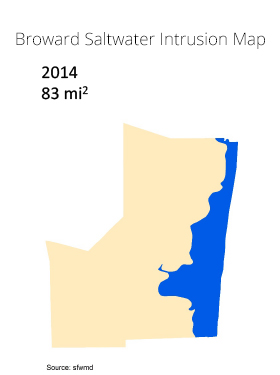 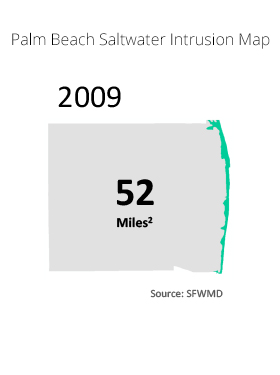 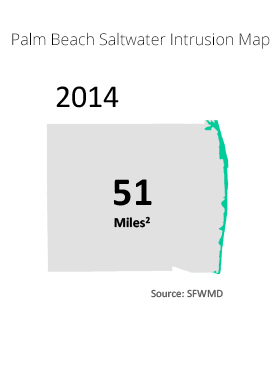 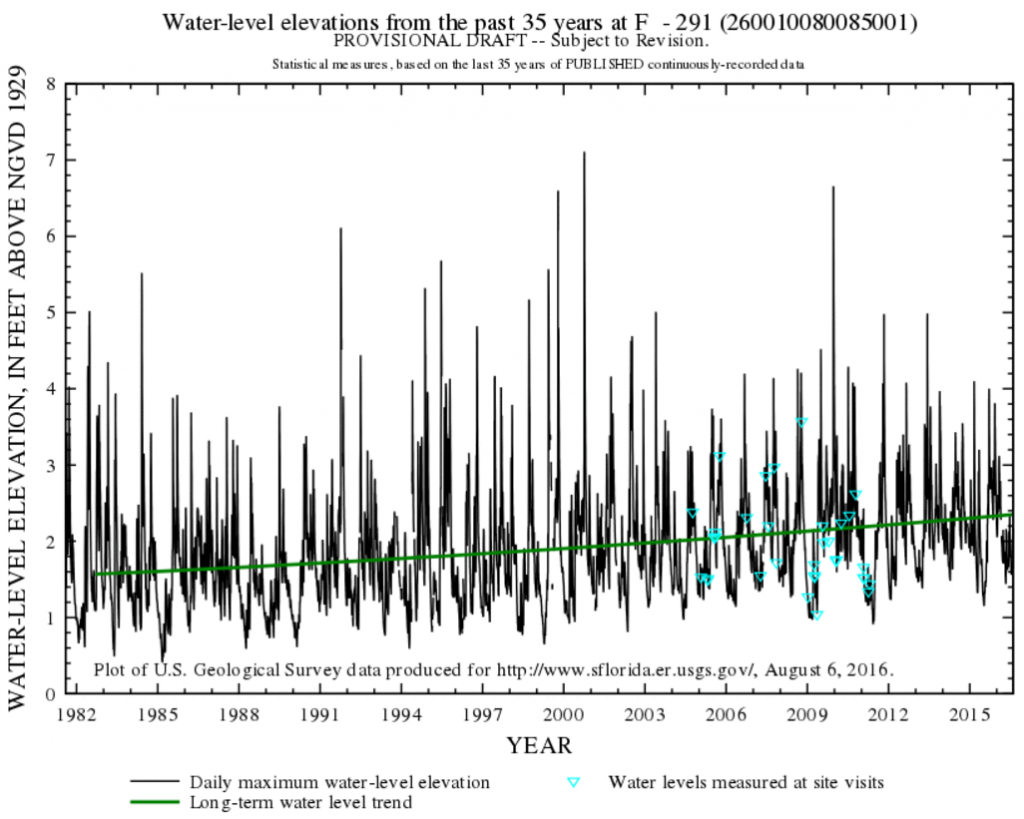 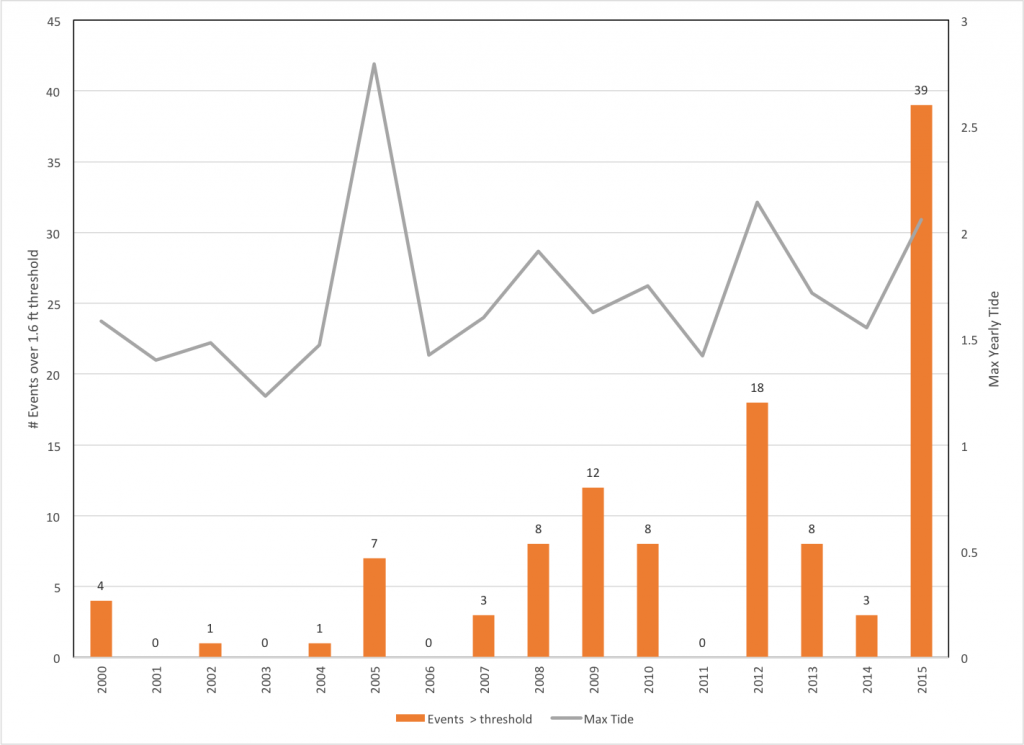 While southeast Florida is known for its mild climate and warmer temperatures, projected global warming will raise the state’s average temperature by between 4 and 10 degrees Fahrenheit over the next 100 years (NRDC). Heat stress is hard on the entire community, particularly low income, young, and elderly residents (Broward County). This is likely to affect human health in several ways: by increasing heat-related illness, by exacerbating poor air quality, and possibly by increasing the incidence of infectious disease. It also potentially affects agriculture and the increase in intensity of hurricanes. 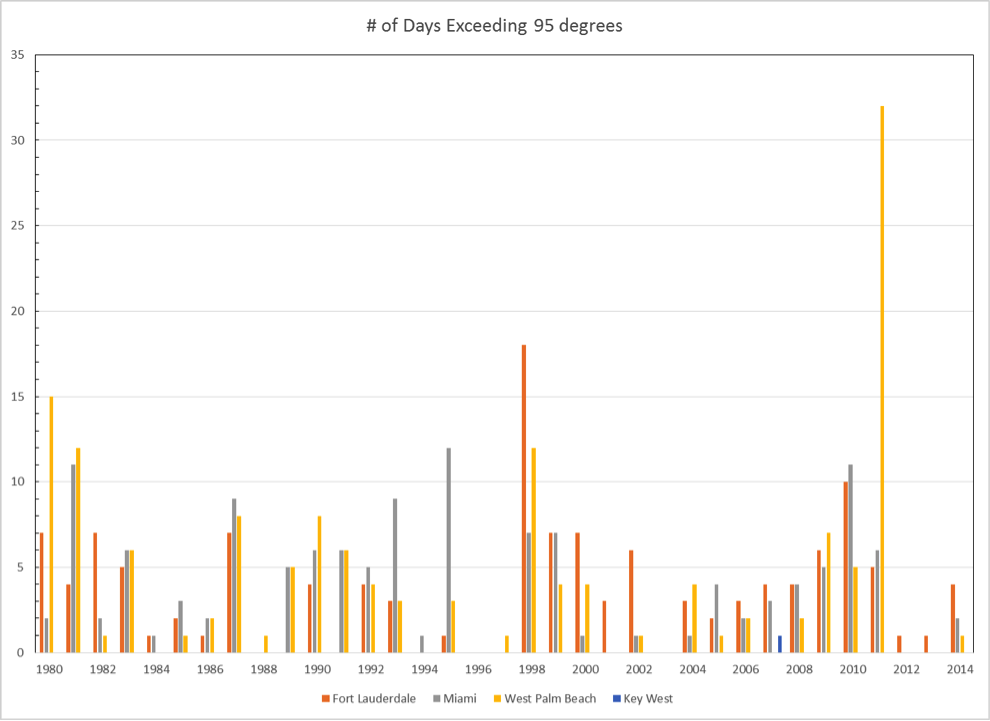 Numerous high intensity storms have caused flooding locally leading to disruptions and damage or loss. Precipitation from severe storms is generally quickly drained from the landscape into the ocean, reducing the potential recharge of the freshwater aquifer as compared to frequent rain occurring during the wet season. A change in the long term trend of storm frequency or intensity is not yet identifiable. 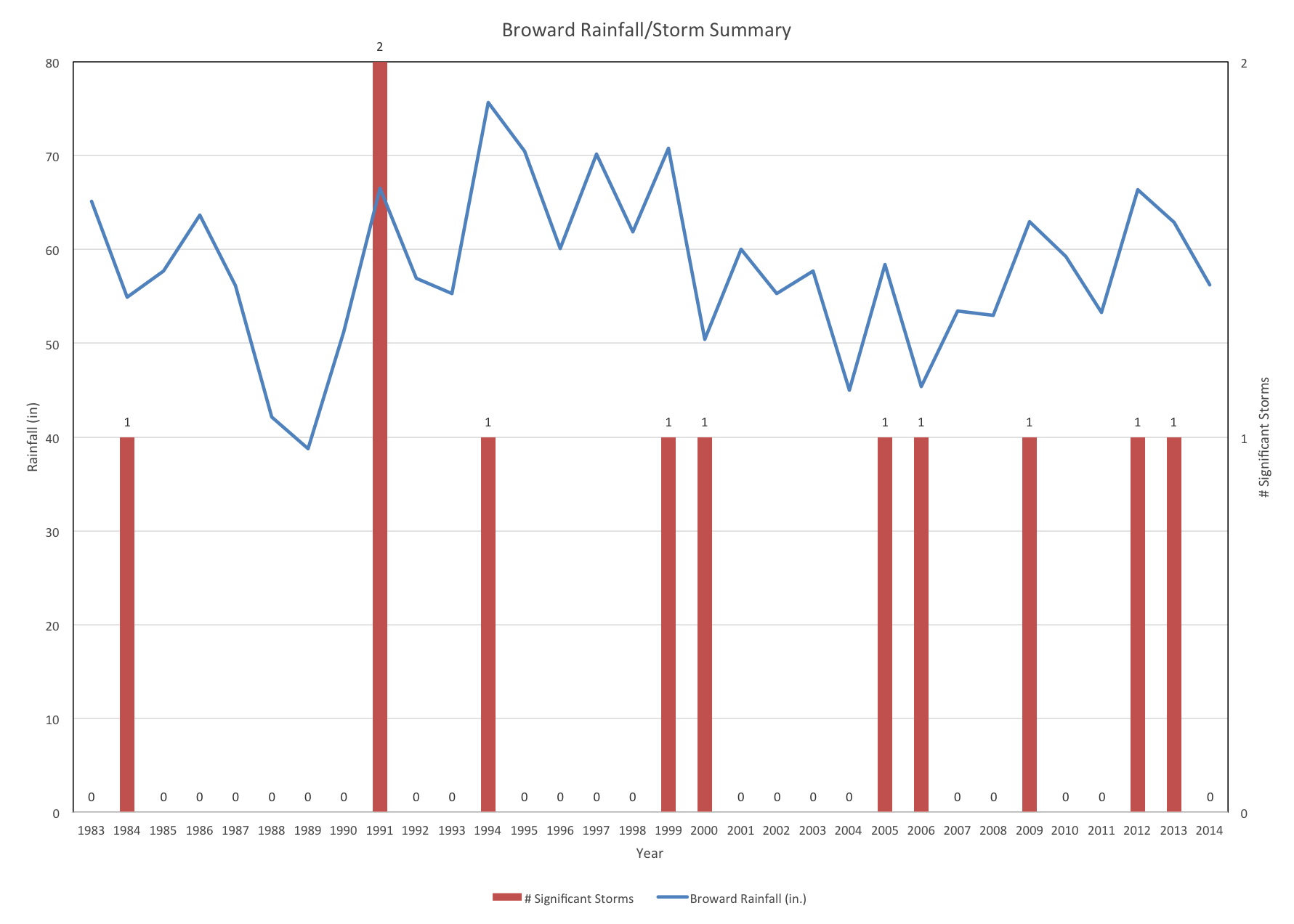 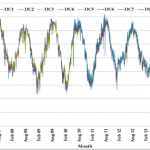 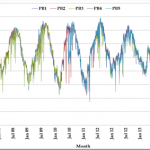 Our changing climate has already begun to affect rain patterns and intensity, as well as drought. Tracking these changes is important. Drought conditions are due largely to warmer temperatures, which increase evaporation, instead of just changes in precipitation. A drought can be agricultural (low soil moisture, which affects crops), hydrological (low rivers and reservoirs), meteorological (below average rainfall), or societal (affecting society in a measurable way), although the most popular benchmarks are whether it affects crops or rivers and reservoirs.

The average regional precipitation has consistently averaged approximately 56 inches over the past 20 years. Annual precipitation is slightly more often below average than above average. Precipitation varies significantly month by month in response to storm events. The region is reliant on consistent seasonal rainfall to recharge the freshwater aquifer and protect against drought. 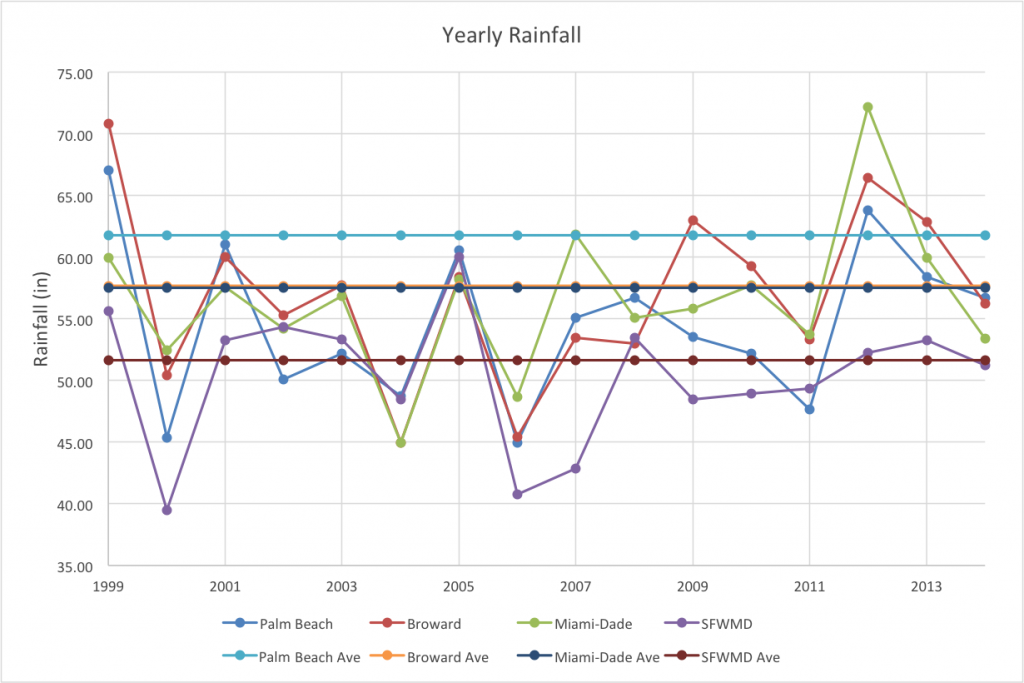 The USDA Plant Hardiness Zone Map was updated in 2012. Compared with the 1990 version, zone boundaries in new map have shifted in many areas. The new PHZM is generally one half-zone warmer than the previous PHZM throughout much of the United States, as a result of a more recent averaging period (1974–1986 vs. 1976–2005).

This collection of climate indicators is a product of the Southeast Florida Regional Climate Change Compact’s Indicators Working Group. This was created with significant contributions from Broward, Miami-Dade, Monroe and Palm Beach County personnel, as well as the Florida Climate Institute and the USGS.